Many people who share their lives with a dog have more than one dog, and while this can enrich and improve the lives of the people and the dogs in this situation, it can also result in situations where dogs living together in a household end up fighting. This can be hugely distressing for everyone involved and can result in significant injury for either or both dogs. Behaviourists refer to this as interdog aggression. 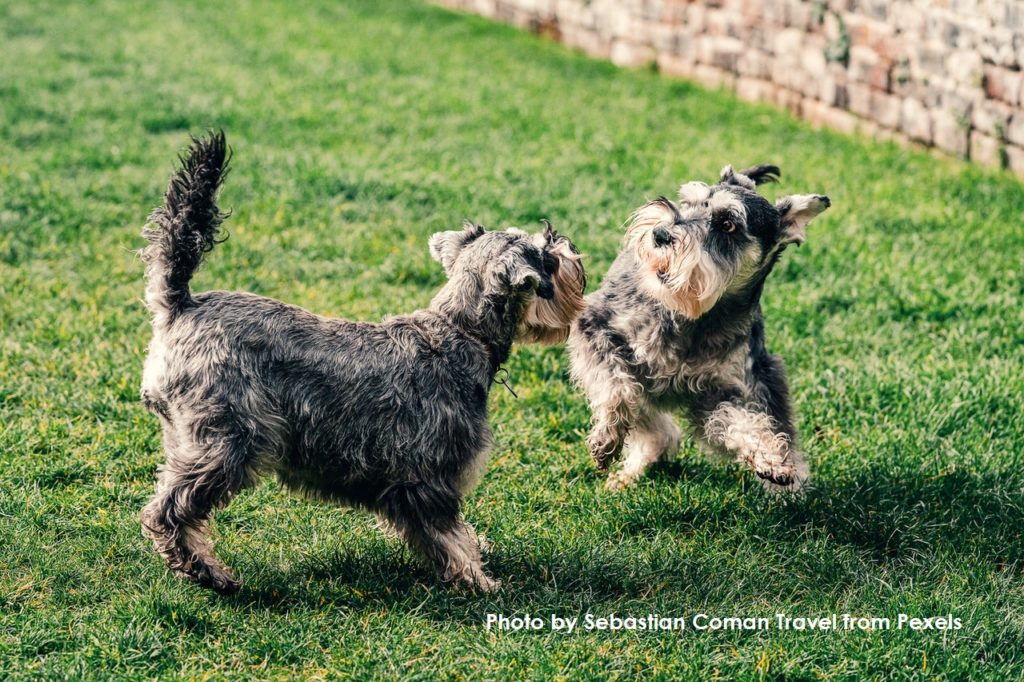 So what is aggression?

There are many misperceptions about aggression and before we go any further, it is important to consider what aggression is and is not.

Aggression is defined as “a physical act or threat of action by one individual that reduces the freedom or genetic fitness of another”[1].

Aggression describes a group of behaviours – something an animal does – and although we can use the adjective ‘aggressive’ e.g. an aggressive dog – it is important to remember that this is not the defining characteristic of the dog. In fact, there is no such thing as a non-aggressive dog since ALL dogs have the ability to ‘be aggressive’ depending on the situation.

Aggression is a component of communication and by necessity involves another being (dog, person, cat, horse, sheep etc).

Aggression can be judged as being appropriate or inappropriate to the situation.

Aggression DOES NOT explain the cause of or motivation for the aggressive behaviour.

Summarising something as complex as dog behaviour in a blog article is like trying to summarise the history of the world – impossible on the one hand and with so many potential starting points, on the other. There are many factors at play and the complexity around any one of these makes it extremely challenging to summarise succinctly. This should also make you very sceptical of people who try to reduce dog behaviour down to one-dimensional theories that try and explain the variety we observe through over-simplified concepts.

A big challenge of researching and discussing canine aggression is that there is no single classification system. Aggression can be classified based on target, motivation, or situation, which makes discussing different ‘types’ of aggression very difficult.

In this post, I’m going to cover aggression between dogs who know each other and who are living together in the same household. In part 2, I will discuss the risk assessment we use when dealing with fighting dogs in a household and in part 3, I will discuss aggression towards unfamiliar dogs.

As a social species, dogs are capable of forming relationships with other dogs, people and animals. While most dogs living together in a household are not related to each other, depending on how long they have been living together, it is safe to say that they have some sort of relationship. Sadly, the spectre of ‘dominance theory’ has resulted in many misconceptions about how this relationship works and hopefully the explanation below will give you a much clearer understanding of why we need to think differently about aggression between familiar dogs.

Behaviour displayed by an adult dog is influenced by their genetic makeup (breeding), their life experiences (learning) and the environment they live in (daily life).  Their current emotional state and motivation to do something also influences how a dog behaves.

Dogs are what we’ve made them

When people talk about the wolf as the common ancestor of the dog, it is easy to forget that the 40000 odd years between when wolves were hanging around our ancestor’s fires and now, have had an enormous influence on what dogs look like and how they behave. The majority of dog breeds in existence today were selectively bred to look a specific way and act a specific way. This means that a typical Jack Russell Terrier is likely to be more energetic than a typical Cocker Spaniel and a typical Golden Retriever is likely to be more human-orientated than a typical Basenji. But, like most biological systems, while the majority of individuals fall within the average range, there are outliers at both extremes and so it is possible to have a very laid back and lazy Jack Russell Terrier and an aloof Golden Retriever. The important thing to remember is that by selecting and breeding dogs that have specific physical characteristics, we are at the same time selecting for specific behavioural characteristics[2].

Every dog is an individual

This may seem like an obvious point, but one that gets forgotten very quickly when pronouncements are being made about a particular dog’s actions. Dogs have different personalities which means that an individual dog may be more motivated or less motivated to engage in species specific behaviour like barking, digging, hunting, chasing, running and sniffing. Every dog has needs that are more, or less, important to them – case in point, the dog who would do ANYTHING for food versus the dog whose favourite thing is chasing small rodents versus the dog whose favourite possession is their soft teddy.

As a species who communicate primarily through verbal language (speaking and listening), we may find it hard to understand that a dog’s main form of communication is not barking but all the (often subtle) body language signals that they use as easily as a chatty toddler. Body language can communicate: 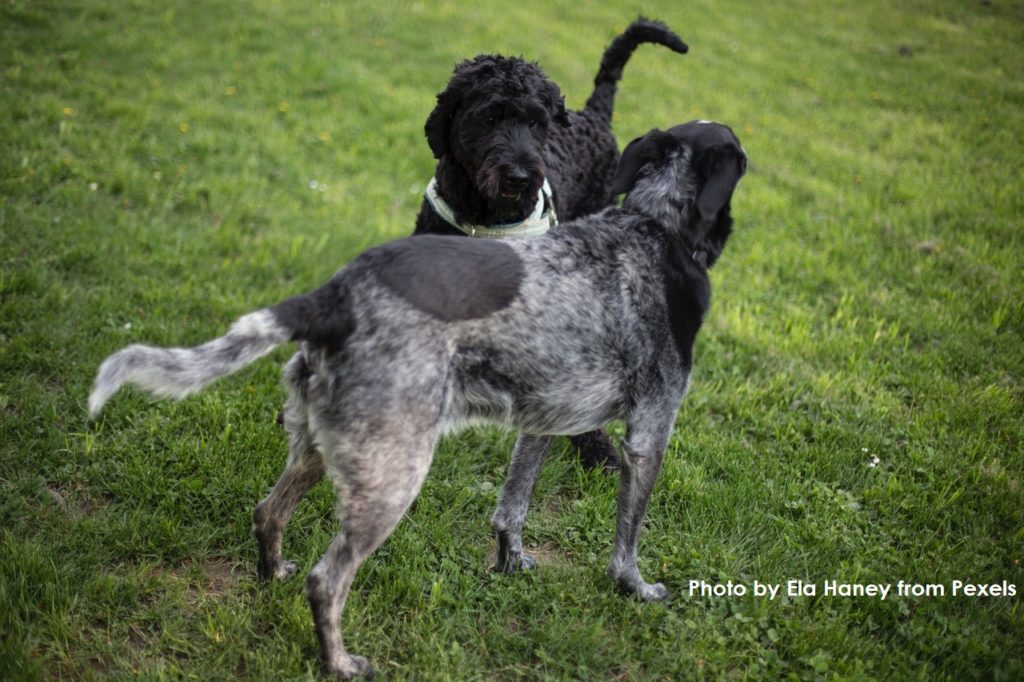 Aggression is a last resort

So, what does it mean when dogs who know each other and have had a good relationship start fighting? (In some cases, the dogs have never had a good relationship, and it has just deteriorated over time to the point that it has become serious enough for the owner to address)Aggression is a costly strategy. If a dog is aggressive to another dog, they could end up getting injured in the process and damaging important relationships. Often there is a lot going on prior to overt aggression that aims to defuse a potentially problematic situation and yet this can be subtle enough that the people living with them miss these.

How can you know if dogs have a good relationship or just tolerate each other?

Behaviours such as greeting with relaxed body language, licking around each other’s mouths, playing together, sleeping together, resting together, maintaining close proximity or casual body contact are all examples of affiliative behaviours.

A fundamental change in the relationship

Dogs go through various developmental periods in their journey from birth to death which we tend to reduce to puppy vs adult, when, in reality, it is far more complex. The socialisation period (3-14 weeks of age), sexual maturity (6-9 months of age), and social maturity (1-3 years of age) are all normal phases of dog development which involve brain changes and associated ‘personality’ changes. Perhaps your young puppy has grown into an adult dog and is wanting to claim additional cuddle time on the couch or your teenage dog has discovered that female dogs smell good. These things can alter the relationship between dogs and may result in transient squabbles and bickering while re-establishing the relationship or they can result in more serious issues that require careful management to restore harmony.

A breakdown in communication

Dogs may experience physical issues that affect their ability to communicate effectively – it’s easy to understand how sensory changes such as deteriorating vision or hearing loss can impact the communication between two dogs, less obvious is how pain and discomfort can alter expression of body language to the point that a communication breakdown occurs. Think of the last time you had a terrible headache that made speaking above a whisper impossible and how this possibly impacted communication with those around you. Now imagine a dog with chronic osteoarthritis trying to make their body stiff and tall to communicate with a rambunctious young puppy.

Just as our lives involve stress, so too do our dog’s lives. The difference lies in what we consider to be a stressor. While moving to a new home may be a stressful yet ultimately exciting step for us, the process of packing up, moving and unpacking in a new home can be extremely stressful for our canine companions. Major changes such as a new baby or pet, home renovations or family members moving in or out all affect our dogs just as much as they affect us. Even small changes such as new furniture, a changed work routine or a friend coming to stay for a weekend can be stressful and deplete emotional resources.

Which brings me to the last point. Our dogs are exceptionally good at coping with the complex, confusing and ever-changing world we expect them to live in. But how they cope with this depends on many factors. Chief amongst these is the dog’s ability to cope, i.e. the coping skills they developed while they were small puppies trying to get the best teat, being separated from their mom and litter mates, and being introduced to new people, animals, situations and events. Our dogs are learning all the time and may quickly learn that they don’t like the way somebody greets them but that they get into trouble if they try and avoid this or even ‘worse’ try and show this by growling or showing their teeth. So instead, they learn to tolerate it and ‘cope’ and this uses up a bit of emotional energy. And so it goes with the myriad of situations in a day – the cat who jumped on the kitchen counter that they wanted to chase but didn’t because their human doesn’t like that, their buddy who came to lick out their bowl before they had even finished, having to wait FIVE MINUTES while their human put on her shoes to take them walking. When lots of these things happen in one day, their ‘bucket’ of emotional energy may be drained and the final infraction, their buddy coming to jump up on their human’s lap when they were already there getting a prime cuddle, may be the tipping point that results in an act of aggression. While many dogs will respond to an outburst like this by backing off or offering appeasing behaviour, there may be times when both dogs are at this point and then a fight can ensue. 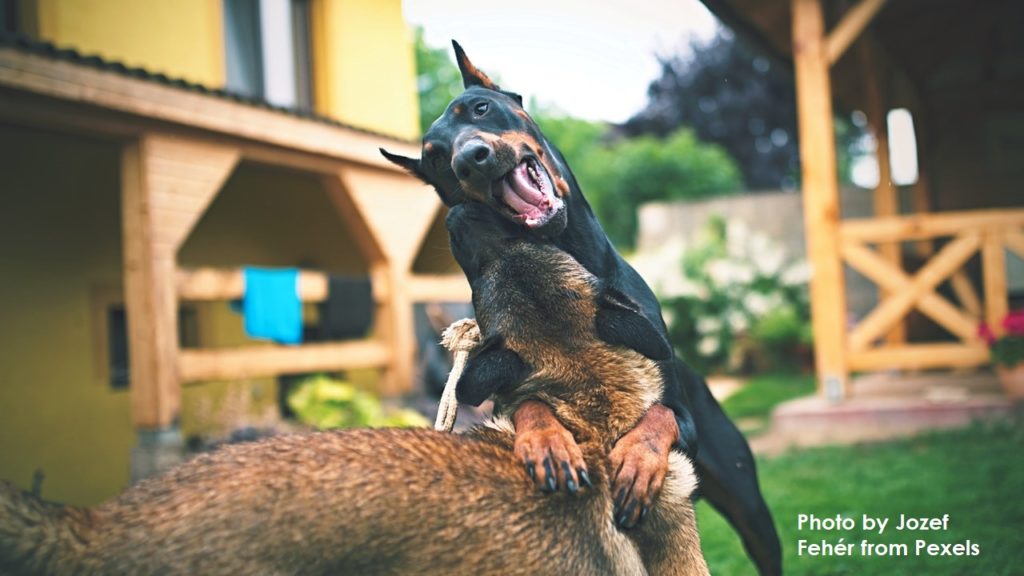 Once dogs have had a big fight, it breaks down the relationship between them and can cause anxiety and wariness. This alters the way they behave around each other, the body language they use, and how they respond to interactions which can ultimately lead to more fights. The ‘victim’ may decide to launch an offensive attack to protect themselves before the other dog can attack them or the aggressor may remember that they were able to gain the upper hand in a previous fight and may therefore behave more assertively towards the other dog, upsetting the social balance.

Behaviour therapy, overseen by a professional behaviourist, is about fixing this relationship through helping to re-establish an appropriate relationship dynamic, repairing a breakdown in communication, reducing stressors and helping dogs to cope with the things that are stressing them out.

Dogs fighting with each other can have a number of terrible repercussions. A qualified animal behaviourist or veterinary behaviourist can help you to navigate this difficult time and restore harmony within the house so it is critical to seek professional help as soon as possible.

[2] This is often why sterilisation is recommended for dogs exhibiting behavioural characteristics such as generalised anxiety, aggression or compulsive disorders. Since there is a genetic element to behaviour, we want to eliminate these characteristics from the population.

Why do vets recommend castration – A behaviour perspective

Where your vet can help prevent behaviour issues